My dad, my boss, and for the past 16 years, the Mayor, or city council member of our small coastal town, Fort Bragg CA just hung up his suit and tie and retired from his service to our community. Sure, he’ll still have his hands in many projects, such as the Noyo Center for Marine Science, he’s the president of Fort Bragg Rotary, but for the most part, he’ll just be my dad and my boss again.
Sharing my dad with our city has had its ups and downs, but I wouldn’t change a thing.  For 16 years, I’ve watched as he shaped dreams into reality,  stood up for people with no voice, stood up to people with loud voices, and always kept his voice, the voice of reason, truth, and the voice in his heart of hearts that he knew was right.

My dad is not your average business owner, he’s not your average mattress maker, in fact he’s not your average anything, because everything he does, he does 110%.  If you take a look at our customer reviews, even our policies, such as the goldilocks guarantee, you’ll see my dad shining thru, he cares about . . . people, he wants to “do what’s right” for the customer, for the homeless, for fellow members of our community.  And you can bet, thats how he’ll be remembered in our city, and the mattress industry alike.
Our biggest competitor in the bed business saw me at a trade show once, and old guy who had known my dad for years, he introduced himself, I was taken back, “He said, tell your father I said hello, and make sure you listen to him, he’s always wearing the white hat.” I could really go on and on, but perhaps I can sum it up with this.  On December 10th, my fathers last council meeting and 67th birthday, the city proclaimed it “Dave Turner Day”! Who gets something like that?
Dad invented the “Original Personalized Latex Mattress” 22 years ago, lead FloBeds to become the leader in Talalay latex mattresses online and off-line and taught the FloBeds team to provide the best customer service in the industry, for the last 16 years he has also lead the City of Fort Bragg to be the greatest little city in the world.

Here is what the local newspaper wrote:

New council members were seated and outgoing members were recognized during the Dec. 10 City Council meeting at Town Hall…
…Dave Turner was recognized by Congressman Jared Huffman … Turner received a congressional records statement – something that is entered into the congressional record – honoring his years of service.
Lindy Peters, in one of his last acts as mayor, read a proclamation declaring Dec. 10 Dave Turner Day. Many at the meeting wore shirts with Turner’s face on them that said “Dave Turner Day.” The proclamation cited Turner’s work on the mill site, the Coastal Trail, the successful Georgia Pacific/Office Max litigation, the Noyo Center for Marine Science, the Downtown Streetscape Project and more.
Fittingly, Dec. 10 is Turner’s birthday.
Turner was first elected to the council in 2002, then re-elected in 2006, 2010 and 2014. Dave served as mayor from 2004 to 2006 and from 2010 to 2016. He served on the city’s Finance and Administration and Public Works and Facilities committees as well as several ad hoc committees. He also served as the city’s representative to the Fort Bragg Fire Protection Authority and Mendocino Solid Waste Management Authority.
“I would like to thank the citizens of Fort Bragg for the honor of representing them these last 16 years. I love Fort Bragg,” said Turner at the meeting. “As I said in 2002, Fort Bragg will not dry up and blow away. We are a community of ornery, independent, caring, resourceful people. Anne and I moved back to Fort Bragg with Katie, Dewey, Packie and Bryna because we saw this as the best place in the world to raise a family. We have all seen obstacles along the way and our town has risen to meet them.” 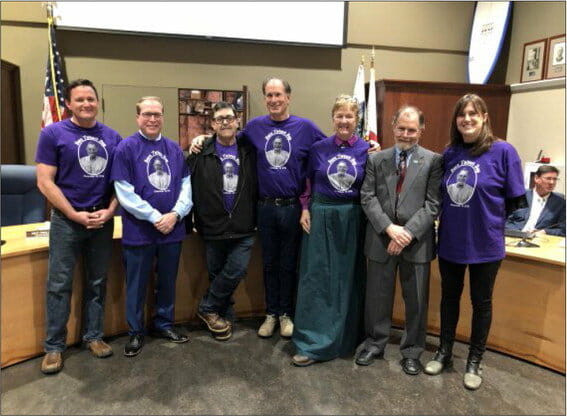