By Hema Parmar and Matthew Campbell
September 17, 2018, 9:23 AM PDT
Sunham’s 1,400-thread sheet set found to have count of 505
Company’s products also sold at Bed Bath & Beyond and Amazon
A supplier of bedding to Macy’s Inc. is under scrutiny in Texas for allegedly misleading consumers about the quality of one of its products.
Sunham Home Fashions markets its four-piece Barrett Collection queen sheet set as having a 1,400-thread count. Yet a third-party test commissioned by the state’s Agriculture Department found it has a thread count of 505, “which constitutes a materially false, misleading or deceptive act or practice,” the agency said in a July 25 letter. 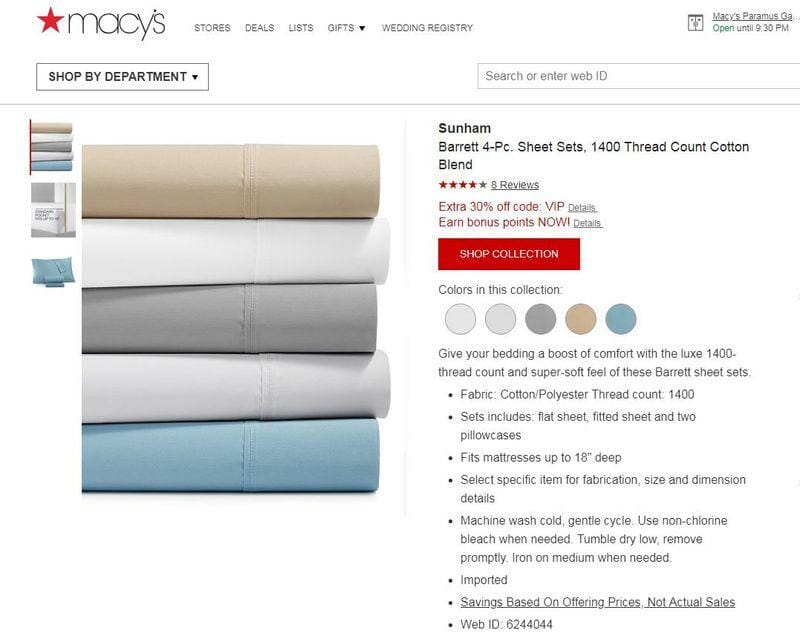 Four-piece Barrett CollectionSource: Macy’s.com​​​​​​​
“TDA has determined the distributor, manufacturer and retailer may have engaged in deceptive acts and practices within the State of Texas,” according to the letter sent to Sunham’s New York office, Sunham Bedding Ltd., and Macy’s, and obtained by Bloomberg.
Thread count is the term for how many threads are in each square inch of material. Broadly speaking, the higher the count, the softer and more pricey the sheets.
Sunham President Jane Bognacki initially said she would speak with a reporter, but then didn’t respond to subsequent voicemails or emails. Macy’s declined to comment.
Vartest Laboratories conducted the test on the sheet set. The state agency, in its letter, called for the companies involved to either stop selling the sheet set or to accurately repackage it to reflect the correct thread count.
Discounted Price
As of Sept. 17, Macy’s was still offering the Barrett Collection sheet set, which is made of a cotton and polyester mix. The queen-size set has a list price of $200 on the retailer’s website, though a sale and extra discounting brought the price to $55.99. The package back says the set is made in India. Amazon.com Inc. and Bed Bath & Beyond are among other retailers that carry products from closely held Sunham, which was founded in Hong Kong in 1962.
The TDA also recommended that the Texas Attorney General and U.S. Federal Trade Commission investigate further and, if they determine deception occurred, “prosecute said actions to the fullest extent of federal and state law.”
The state’s Agriculture Department can enforce penalties on Texas-based companies, according to spokesman Mark Loeffler. But in situations where a company is based outside of the state, it refers the case to the Attorney General’s office and the FTC.
Kayleigh Lovvorn, a spokeswoman with the Texas Attorney General’s office, confirmed receipt of the letter, though declined to comment further. A spokesman for the FTC declined to comment.
This isn’t the first case of alleged linen fraud. In 2016, Target Corp. ended its relationship with textile giant Welspun India Ltd. after the retailer discovered that 750,000 sheets and pillowcases labeled as Egyptian cotton under the Fieldcrest brand didn’t contain any Egyptian cotton and were made from a mix of lower-quality fibers. Target, whose investigators analyzed sheet fibers under microscopes and tracked their supply chain, had been Welspun’s second-largest customer, behind Bed Bath & Beyond. Target offered refunds to customers.
====
original article can be found here:
https://www.bloomberg.com/news/articles/2018-09-17/macy-s-bedding-supplier-under-scrutiny-in-texas-for-thread-count
====
FloBeds has been wary of thread count claims for some time:  see earlier article here:
Consumers Report sheets wake up call